A Tale of Two Aunts 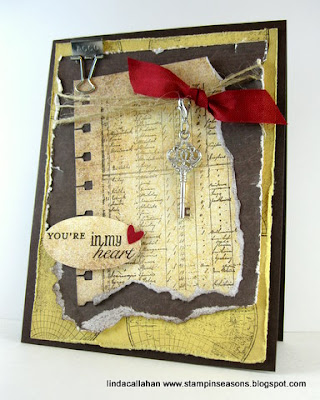 My father's parents and four older siblings came to America from Holland on the S.S. Noordam in 1920. I searched Ellis Island records and found the original ship's manifest that lists his parents, brothers and two sisters, Alida and Alida.  The Dutch custom was to name the first girl after the father's mother and the second girl after the mother's mother.  Since both grandmothers were named Alida, the sisters had the same name. The family called the eldest one Da (rhymes with Pa) and the younger one Al (rhymes with doll).  My grandparents tried to explain this to the customs agent but he was having none of it.  He said they needed different names to enter the country and re-christened them Alice and Dorothy - and I grew up calling them Aunt Al and Aunt Dot.
The stamps from The Open Sea perfectly captures the look of the actual ship's manifest.  I followed the sketch from Stamping 411 and used a sentiment from Word Play.
Posted by Linda Callahan at 1:52 AM

Your card and story are wonderful! It is very ironic that I read this post today. My son just read a book about Ellis Island and we discussed it this morning before school! He was so interested in the stories he read. We called my Mom in NJ to ask questions about our family while driving to school and are planning a trip there when we visit - all before 7:30 am! And then to read your wonderful story... simply amazing. I cant wait to tell him when he gets home!:)

What an incredible story, Linda, to go along with your stunning card! Love the details of both!

Thanks for sharing the story and this wonderful card. I just got this stamp set and LOVE it too! I look forward every day to see if you'll be posting and to see what you've come up with. Thanks for sharing your talent!

Great card, Linda. It certainly has a beautifully nostalgic feel to it and I love how you altered the sentiment to fit the oval!

Your card is beautiful. I love the story you told us. DH & I love genealogy. Have you added that story to your "written history"? None of my ancestors came through EI...they were here before that. {{Hugs}}

Fabulous story! I love hearing about how other families arrived here. Your card is beautiful. Hugs,

What a wonderful story. Thanks for sharing it with us. Love the card too.

What a fascinating story, Linda!! Love it :) My dad came through Ellis Island from Czechoslovakia. Love that you found the original. Great card using it. Love the distressing.

Love this card---I just got this set, too, and seeing the vintage creation you've made makes me glad I did. TFS that very cool story. What a great little piece of history to share!

Your card is beautiful, love the shabby chic look...and your story is awesome, thanks for sharing!

Linda I LOVE your card. the whole "look" is nostalgic. Love how you used the stamps as BG paper and the punch on the ship's log. The key is perfect to show "key to your heart" sentiment hung with a red bow. Just beautiful. Your story was sooo interesting. Can you imagine two sisiter with the same name today? Kinds like George Foreman with 5 Georges. Wow.. The first cruise I ever took was in the early 70's and the ship line was Holland America and ship was the "Noordamn"!
Hugs.

What a great idea, Linda! I love the story of the names, nicknames, etc. The card is so perfect!

What a fabulous story. The manifest stamp is such the perfect stamp for your card. You've obviously put so much thought and love into your project!

WOW! What a STUNNING card! And, love the story, will see that set with new eyes! Great job!

What a great story, and a great use of this new set! Thanks for the inspiration!

Linda, firstly, fabulous card. It is so beautifully balanced and the little pop of red - perfect.
What an amazing story. Thank s so much for sharing
jaydee

What an awesome story and I love love love this card!!! I will be featuring this card on My Crafty Picks #13 on 4-24-11. If you wish to decline please email me at trbauer@insightbb.com

Thanks for playing along with us too!!!

I just LOVE that story! And the torn paper to go with the "old world" look is so perfect! LOVE the card!

Not only do I love you card, I always love your stories in your posts. So fascinating. The pop of red from the bow is the perfect compliment to the other colors.

This is absolutely stunning! I love the gorgeous ribbon and the key!

fabulous job -- love the way you used the key-- just beautiful! Thanks for sharing and thanks for playing along this week on Stamping 411! Blessings, Gretchen

A gorgeous card, well done on the stampers showcase!

What a striking card. You can feel the nostalgia behind it. Love the story too. My husband's family is also from Holland so it was interesting to read about the custom with the names.

OMGosh! I love vintage collage and I am not very good at it at all! I love the key, the clip, and your sentiment is wonderful too!

I love your card. I cannot wait to order this set and DSP. This looks like a journal cover.

Linda, this is fabulous! Looks just like a long-lost ship's log book. I can just imagine it in a steamer trunk covered with stickers from long ago journeys. It's always a treasure and a delight to visit your blog and read your stories. ((hugs))

Wow Linda, I had a read of your story...how amazing! Thanks for sharing. Your project is fabulous, love the antique feel of it.
Hugs,
Lesley

Fabulous card with a fabulous post! So glad I saw this at Tiffany's site!

Oh wow! Linda, this card is absolutely gorgeous! I need to come and visit your blog more then I do. I love that your famiy history inspired you to make it. I enjoyed reading about your two Aunts. :)