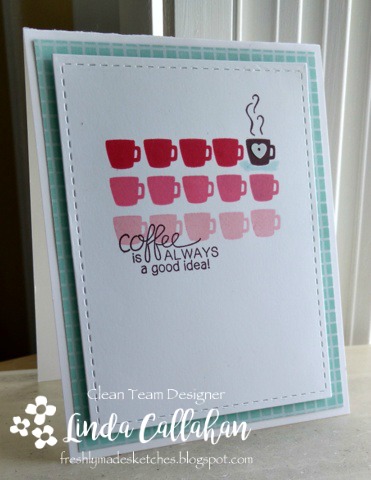 I love hearing people describe their creative process to create cards. In the beginning I scoured countless blogs admiring beautiful cards and hoping fabulous ideas would leap off the computer screen into my head.....that was the Wishful Thinking Method of Stamping. Next I became a late night stamper and was convinced that the best ideas happened after midnight......the Hail Mary Method. Then I subscribed to a zillion stamping magazines and tried as many different trends and styles as I could.......known as the Throw It Out There and See What Sticks Method.  These days I prefer to craft in the morning so I am now using the Sleep On It Method.  I scope the challenge the night before and plan what I am going to do as I fall asleep.  So for this card I decided I would use an ombre technique to stamp chicken wire in three sections.  Then I would put a crazy looking chick with blue hair in front with a sentiment.  And somehow this card became all about red cups and coffee........I think I need a new method.....

I love Karren's sketch at Freshly Made Sketches this week and look forward to seeing what you do with it.....and I'd love to know what you were thinking to get you there! 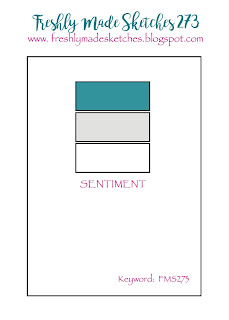 Any method you use is okay with me. Your cards are always an inspiration to me. Love this coffee cup idea.

I love your sense of humor. Whatever you are doing works...your cards are great.

I had to chuckle reading this post. Just keep doing whatever works for you as I love your cards! 💕

That's a lot of cuteness, especially the lone chocolate cup!

You always make me smile with your posts! Great way to start the day, your post, not coffee. :) Plus, your cards are always inspiring and this one is no different. Love the ombré, the cups are adorable and the sentiment is perfect! Can't wait to read about your next method!

I personally subscribe to the wait until the last possible minute and use what is on the desk scenario aka "The Divine Intervention Method". Love the coffee cups! And yes...that sentiment sums it up!

Linda, "
I don't care if it's after midnight, early morning, mix it up, throw it over there, or what..... I LOVE your cards and this one is adorable! I did not think about ombre' when I first looked at this, but that's exactly what it is! I love that you used those one image for many coffee cups! My daughter and her friend meet for coffee every day before work, I think I make some of these for her to have on hand for birthdays, etc.

PS: I can't get those cute chickens and chicken wire out of my head from the card that Ann Schach made!

I love it! The cups of coffee and the sentiment are just perfect. I have a similar method of running frantic, grabbing any stamp set that looks like it might work for the sketch and than mashing paper around until it does look like the sketch. Sometimes it works well...sometimes not so much. ;)

Adorable! And some of those stamping methods sound pretty familiar.

Such a cute card, Linda! I love these coffee cups - great balance with the darker mug and sentiment. <3

HI Linda, I see that your chicks turned into coffee cups...You got the ombre right! I am a surf the stamping world at night and sleep on it method kind of girl...or sometimes I flip that method and do it in the morning..the surfing part and think about an idea during my day...esp. when doing yoga!

Happy stamping whenever and TFS your fun card. Hugs..Nancy

HAHAHA! I believe I have used all of the above methods for my stamping inspiration as well! But whatever you used, this is AWESOME! I practically take coffee intravenously but do not have any coffee stamps....isn't that sad? I just don't think to STAMP about coffee, I just inhale it. This cute little set, on the other hand, might make me rethink that! LOVE the colors, the layout (swoon) and the sentiment!! Made me smile today! And I've only had ONE cup of it!

I believe all of your methods have worked perfectly for you, Linda, and this one has evolved beautifully! Have I told you that I dream cards? yep ... that's my method!
=]

Love your coffee card - but aren't you a tea drinker? LOL Your post is very familiar to me, that's for sure. I find that I come up with the components of the card at night, go to sleep and then in the morning go down at look at it again. If I like it, it goes together quickly but I can usually see what the problem is if I don't with a fresh set of eyes (and a cup of coffee). So glad that my struggles aren't unusual! Your cards are always inspirational and love coming to your blog to see what's going on in your world because it's always entertaining!

Ha ha your methods are priceless and all work for you, in my opinion! Your card is also a keeper - your ombre cups are such a fun take on the sketch. As to what was going through my head when I came up with my card? Well, there's this chick on my DT who wanted to see a video involving ink blending and I was only too happy to oblige :)

LOVE your card today - in fact, all of your cards are great ! Also you made me laugh out loud ! Thank you for sharing !

This is such a great card Linda! I love those coffee cups! I'm a tea girl but caffeine is caffeine! I love your analysis of you card making! Nothing happens here after 7 pm!!! I would say mornings are the most productive too!

Although I love the ombre coffee cups I'd really like to see the chick with blue hair someday!

Great idea to add the brown cup too!

LOL I love what you ended up with, these coffee cups are gorgeous. Cx

Oh I love this! Perfect use of stamps for Karren's sketch - perfect because I am addicted to coffee!!!

LOVE your process!! Somehow it worked!! This is such a fun arrangement of coffee cups - I love the steaming mug at the top!

Love this card - such an awesome take on the sketch! I love the way you did the corner cup in a different color and with steam and the sentiment in the opposite corner.