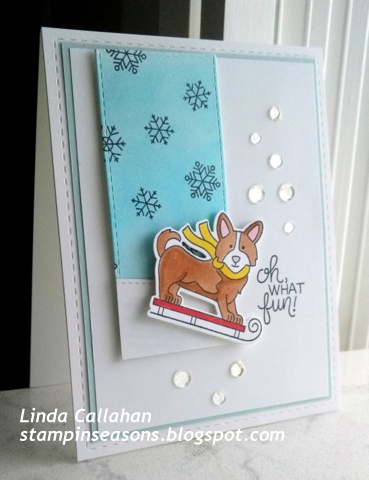 I know most of you are thinking spring but the reality of my world is reflected in this card!

A few nights ago it snowed about eight inches overnight and when the Big Guy went out to shovel he noticed tracks leading to his car and the driver's door was ajar.  First he was mad at himself for not locking his car but then he was really mad because his favorite pair of skis was missing!  Since shoveling is a neighborhood bonding experience he soon learned that there were tracks around cars up and down the street and other neighbors lost that random change left in the cup holder. The change was left in our car - but not the skis!

Using his amazing powers of deduction the Big Guy decided it was kids being obnoxious and they would probably just dump the skis somewhere.  He put the word out to neighbors to be on the lookout for a pair of skis tossed in their yard.  Well today we had some crazy warm temps and lots of melting and sure enough those skis appeared in a snowbank a block away!

And once again the Big Guy is right.....how does he do it?

We had lunch in Lake Placid last week - always fun to hop in the bobsled on Main Street!  Back to snow and colder temps today! 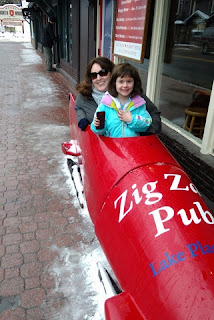 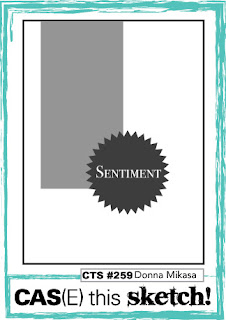 Super cute take on the sketch!

There's absolutely no way this card could have been cuter! Love the image, love the coloring. Such fun!

In this case, I'm so glad the Big Guy was right!!! we girls have to stick together, so you don't have to tell him I said that =]
What a look on this pups face - such a fun rendition of our Sketch, Linda! and I'm so glad to hear a happy ending to this story...
=]

Such a sweet card! Perfectly colored. So glad that the skis reappeared! So crazy that someone swiped them in the first place!!

Wow...you'd have to be a bold and dedicated thief to go out in the snow, leave tracks like crazy and then dump your haul!!! Oh well! Anyway, this little dude is SO CUTE I must ski on over to Newton's Nook to check him out....Cassidy has a little pup just like this and she might actually like to stamp him!!

Linda super cute card! I just love that little dog and what a cute face too. Of course your coloring is perfections.

PS: I TOO have snow in my world and frankly I'm really DONE with it now. Ready for spring.... We just had TWO days of rain with flooding EVERYWHERE and POT HOLES from HELL! OMG...
so sorry about the skis. Even though you found them it would still upset my to think people have no boundaries with other's property. Very scary days at times.
Looks like the Lake Placid visit was a success though.

That skiing pup is so cute! He's on the downhill run for sure and the snowflakes are closing in on Him! Glad your ski story ended well! The big guy may be able to get into detective work if he wanted to. :)

Oh this is so cute, Linda! Adorable. Glad the skis turned up!

I do love this little corgi so much!!! Super cute!! And oh, those little punks....rocket scientists, clearly, leaving their tracks....smh!

Proof positive that thieves are not too bright. Why go to all the bother of taking the skis just to lug them down the street and then dump them? But on to bigger and better things: this card! So cute! It sums up your family's love of all things snow perfectly!