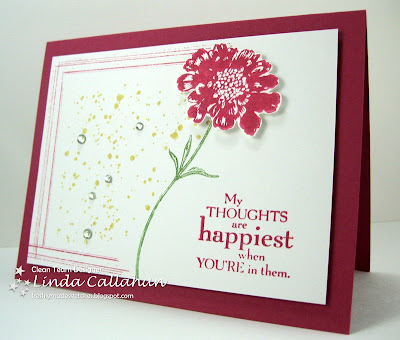 This sketch threw me a curve!  I don't have a background in art - nor do I have any type of training in graphic design which you may have noticed by now :)  But one reason I enjoy designing cards is because it is out of my comfort zone and I am always learning something new.  Jen's design this week is sweet as can be but I just couldn't make it come out right with paper. I finally decided to use only stamps to make it happen.  While writing this post I realized the curve of my stem goes in the total opposite direction from the sketch and the border made from the new Gorgeous Grunge set should have gone all the way across the top.  I never noticed it last night as I finished the card and was delighted that I "made it work!" So technically I didn't make it work but that's not the point.  It's all about creating!  And  it takes practice to hit a curveball - I'll keep swinging - hope you do too!

Jen Brum has a wonderfully creative sketch for us this week at Freshly Made Sketches! 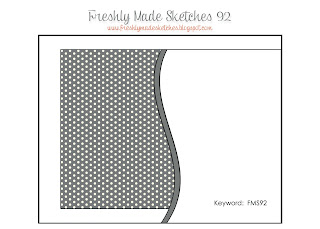 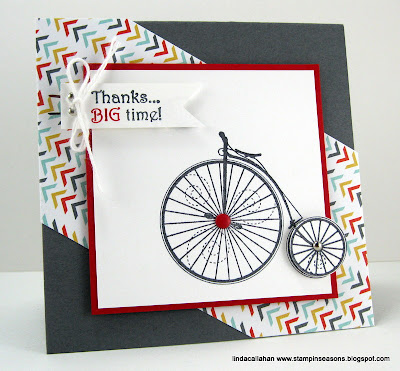 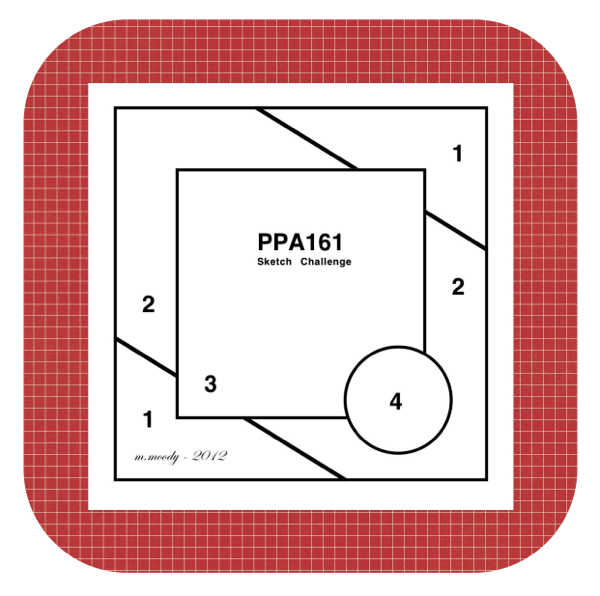 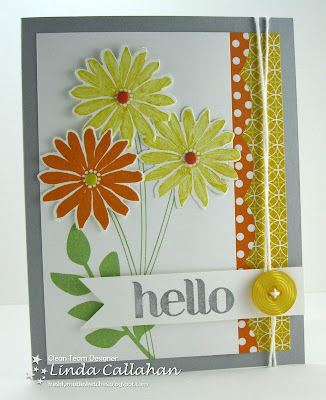 When the new Stampin' Up! catalog arrives each year it takes me days to finalize my first order.  In case you have trouble deciding what to order I thought I'd let you in on my scientific decision making process.  Smoky Slate cardstock and ink had to be ordered - it's a wonderful new color that matches the paint in my kitchen.  The Secret Garden stamp set and matching framelits were bundled together at a reduced price - how could I pass up that deal?  The sweet new buttons reminded me of records - ah yes a trip down memory lane - added to the list for sure!  And candy dots????  How can anyone not buy something so sweet?  Then there is that designer paper - Polka Dot Parade is so happy you can almost hear it laughing.  Eastern Elegance - just the opposite but oh so majestic - and yet they look terrific hanging out together!  But the really tough decisions have to be made when it comes to actual stamp sets.  The message on my card comes from a set of four sentiments called Four You. I took one look at it and well..........it had me at hello..........

Cindy Hall has a great sketch for us this week at Freshly Made Sketches! 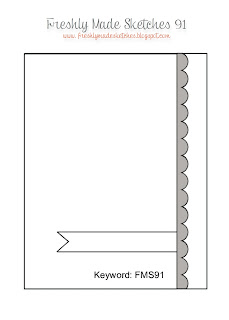 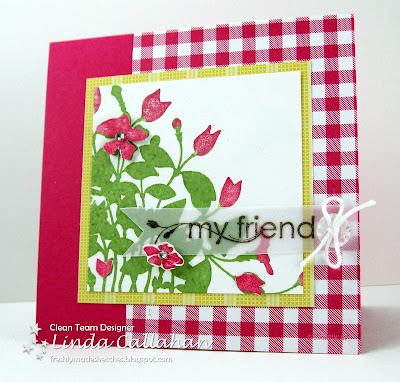 Can't beat bright summer days or a bright summery card!  And on a recent summer day at the lake that little one who brightens my day set off to explore.  After about 5 minutes of playing on a blanket she went off to see the sights - so many interesting things to see on the lawn you know.  She was undaunted by the vast expanse in front of her and just kept crawling and crawling.  My daughter snapped this picture and it reminded me of Andrew Wyeth's painting Christina's World!  But it won't be long and she will be running across that lawn! 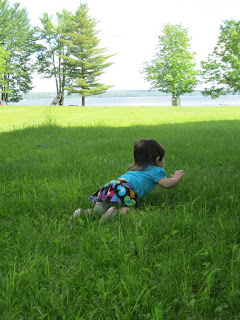 I am delighted to be hosting at Freshly Made Sketches this week!  Sure hope you will join us! 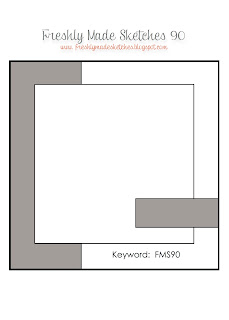 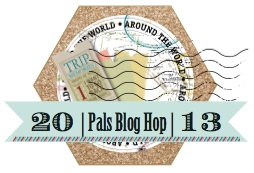 The new Stampin' Up! catalog is out and the Pals are showcasing new products!  You have just begun your tour if you have hopped here from Penny's site!  There's lots more in store for you along the way! 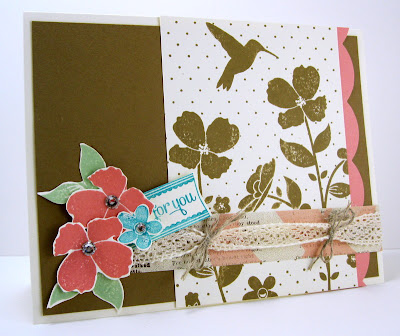 Beautiful new colors and combinations abound in the new catalog. Crisp Cantaloupe, Pistachio Pudding and a pop of Bermuda Bay add a summery touch to the image from Wildflower Meadow stamped in Baked Brown Sugar.  The sentiment is snipped from Label Love and there is a strip of Soho Subway DSP under the Crochet Trim tied up with Linen Thread.  It was such fun playing with new stuff - such fun that I think there is another box of new stuff headed my way in that big brown truck!

Your next stop is Shannon's blog - enjoy!

Here's the complete list of Pals to help keep you on track:
Posted by Linda Callahan at 5:00 AM 24 comments: 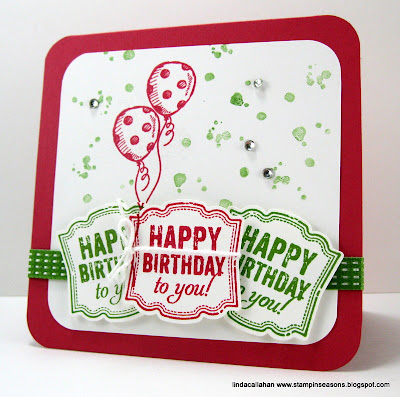 This Artisan Label Punch and Sentiment combo is so cute I had to use it three times - just because I wanted to.  That's Emma's philosophy these days as well.  She has learned to crawl and spends her time exploring every inch of my house - doing things just because she wants to.  So far rolling Coke cans across the floor and dragging Grandpa's dirty sneakers around by the laces are big hits! Today I stopped at a local furniture store and bought a sweet chest for our downstairs hall - just because I wanted to!  I told my husband at dinner tonight that he needs to go pick it up in the morning.  I think he wishes I would just roll Coke cans across the floor....................... 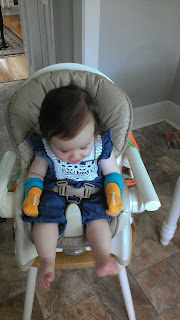 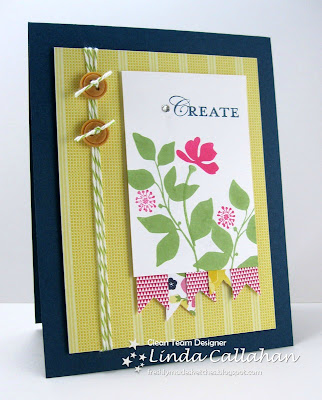 It's an exciting time of the year in the Stampin' Up! world!  The new catalog is out and new supplies are starting to arrive.  Stamp sets, snazzy embellishments and delightful ribbons are on the way - and perhaps a framelit or two!  And you know what this means - a total reorganization of the craft space!  What is the allure of organizing stamping supplies?  I can spend hours restructuring and never realize it is past midnight or that the dog needs to go out.  I love to see everyone's craft space and I am forever in search of the perfect "organizer" or a better "system."  So I am sending this card to myself as a reminder of what I am supposed to be doing in my craft room.  I am going to get right back to creating.........as soon as I separate all of these buttons into color families.........

Rita created the sweetest sketch at Freshly Made Sketches this week! 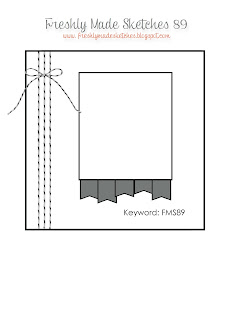