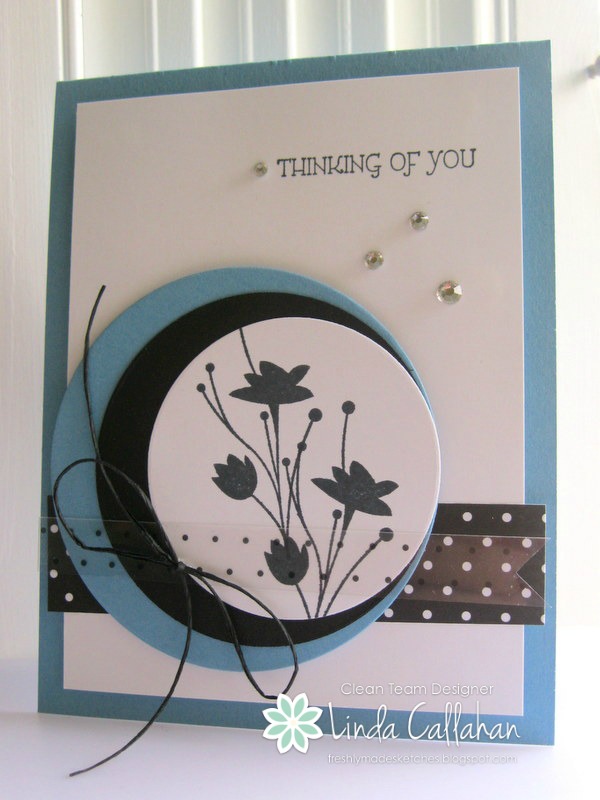 A simple Thinking of You card to send to a friend came together after a not so simple afternoon.  We bought a new car and my son-in-law came over to set up the phone Sync for me. Once installed he tried to teach me how to use it. Every time he used the voice command it worked perfectly. I wasn't as quite so successful! (Have I mentioned there are two pages of commands to memorize - really?)  C'mon now he's a pilot.....he is used to talking to a dashboard......he had a definite advantage over me!   When I tried to talk to the dashboard I would start laughing and that voice would ask me questions back.  What a circus! Just before dinner - after he had given up on me - a friend called and said "So how did you do get that Sync to work?  Sounds like you had a few problems."  It seems that I did manage to make one phone call and never managed to hang it up.......and she got a whole answering machine full of our shenanigans!

Wouldn't it be fun if I could just put this card in an envelope, give a command and have it whisk away to its destination? Now that truly would be voice mail.......

Cindy Lovell has a wonderful sketch for us this week at Freshly Made Sketches!  The flower image I used is from a new Stampin' Up set called A Happy Hooray. 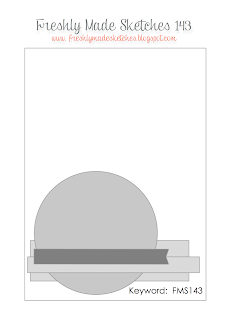 Beautiful, Linda! And what a great story to go with it.
I can just visualize the process. ;-)

Beautiful contemporary-style card, Linda! I am reminded of a time when I was doing a BMW Drive for the Cure and as I was driving along some back roads in a brand-new BMW, I mistakenly hit the "help" button (or whatever they call it on a BMW!) and got an operator!! My GF and I were laughing so hard, we almost missed our turn and got lost!

Linda I just LOVE this card... and I also appreciate your issues with the voice commands on the dashboard... I did find out that some names I had to SPELL for the right number to be dialed! hugs.

Sounds like your son-in-law is very patient! I know young folks just usually roll their eyes when we don't "get it." Love your card, too. I wish they could take voice commands and fly for free!!

The three off-center circles are a wonderful touch on this gorgeous card, Linda. And I'm loving that twine :) Funny story - I hope you've got it sorted now.

Linda, first...your card is darling! I love the spotlight look to it (is that the right word?) But, I must admit, you always always make me laugh! You are a hoot! I have a wonderful funny visual of you two at the phone trying to get this set up. Too funny!

I had almost as much fun helping my mother sync her phone to her new car a couple of years ago. I'll be the first one to admit I have no patience for that kind of thing, but it actually was hysterically funny. She sounded like a robot giving commands to the Starship Enterprise! Oh, and I'm digging your not-so-staid card. Those circles are pretty cool :)

I love how you've layered the circles on this! And I love the clean look the color combo gives as well. I got my car in October and still haven't synced my phone. Every time I pull out the owner's manual (which is as thick as a dictionary), I just feel so overwhelmed and tell myself that I'll have one of the kids do it. Maybe some day!

You had me laughing! You were definitely in sync in the craft room when you made your card, it's gorgeous! Your friend will love it!

Oh Linda! I totally sympathize with you! I can't even figure out how to use the phone in Trevor's truck. I have given up and just hope I never have to use it!!! Great card this week! I love those sweet flowers and the polka dots!

Funny story!! :D
Your card is fabulous!! Beautiful colors and i love the different circles!! So pretty!!

You always make me smile!!! Too funny. And yes, radio practice gives him a clear advantage. Beautiful card. The layered circles are so pretty!

Ahhh...technology...UGH! I am forever switching from the car to my earpiece to the speaker and usually hanging up on everyone! Whatever craziness went on...your stamping was perfect on this card! Such a great take on the sketch!

This is a fabulous card and so out of my usual type to make. Would you be so kind as to give a supply list as to the colors and materials used? I don't recognize the ribbon and cord as current SU products but may have missed them.

Hi Susan......thanks for your kind words! I used Marina Mist and Black with a tiny strip of a retired polka dotted window sheet. All products are SU except for the cord which is Scrapper's Floss.

Thanks so much for the info. I never thought about the retired window sheets. I was thinking you had stamped on the retired organza ribbon. My cards tend to be more traditional, but this modern design really caught my eye and I wanted to CASE it.