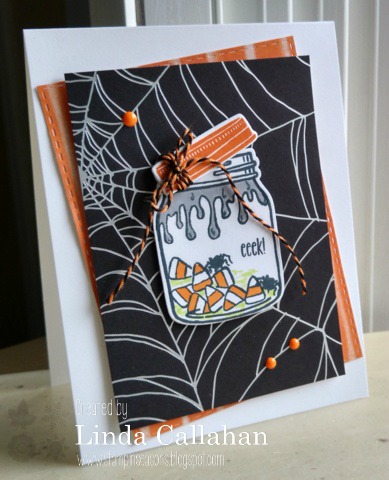 Jar of Haunts is such a fun set for Halloween!  Backed by Halloween Night DSP and a lid that coordinates from Jar of Love it makes a delightfully creepy scene!  These spiders seem to have a taste for Candy Corn!

And one of these critters has a taste for vanilla cupcakes.  Yep it's the guilty looking pup on the left! 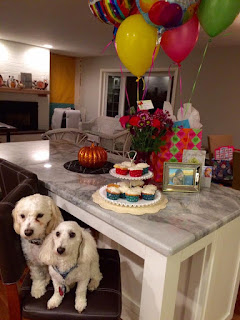 My son and his girlfriend got engaged on their recent trip out west so Erin and I put together a small congratulations surprise since they were stopping to pick up the dogs on their way home.....close to midnight!  I frosted cupcakes, left them on the kitchen table and headed to the couch for a "power nap" about 4:30.  The Big Guy came in around five and said "What is Corduroy batting around under the coffee table?"  Oh it was a cupcake!  I ran into the kitchen and five were missing from the tray......not a crumb in sight!  He ate every bit of them......including the paper.....and then decided to bring one in to show me....such a good boy!

I am sure you saw something fabulous at Valerie's blog.  Now head on over to Wendy's to see something wickedly wonderful!

I based my design on this great sketch from Fab Friday! 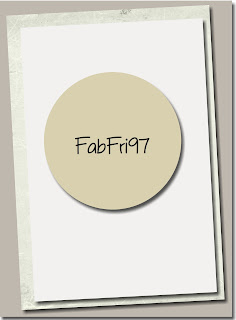 Posted by Linda Callahan at 9:00 PM

Love the card! I think the bad boy looks a little sick. ;-)

No one can resist such sweet things whether they have 8, 4, or 2 legs!!

Love that card! Great design and perfect designer papers. Awesome jar full of creepy crawlies! Your puppy story has me laughing...we had a similar incident here only it involved pork chops. Ha! :) Thanks for joining us at Fab Friday, hope to see you again soon!

What a cute but crawl-y card! And my dogs would not be able to resist the cupcakes either. Before we leave, we have to make sure there is nothing to tempt them within their reach :)

I love your card as always Linda! Super cute and lots of fun little details to it. lol about the dog cupcakes are hard to resist! Mine ate a chicken off the table while my mom was babysitting him. Hopefully the pup didn't get too sick. Congrats on your son getting in engaged!!

Linda,
I love the candy corn/spider jar. It really looks great against that Web DSP. I also like the piercing around the edge... very nice. Hugs.

Oh so cute! I haven't used the candy corn yet - for some reason I keep going for the eyeballs, yikes! This looks much yummier! Thanks so much for playing at Fab Friday!

Just have to say... I used to love candy corn. This may keep me out of it this year!

I'm with Cindy, I may not touch Candy Corn this year! Fantastic card, as always. How can you even get upset with that face!? Too funny!!

Oh, that guilty face?!!!! Hilarious. Now for the record, I'm NOT a fan of candy corn so maybe better for the spiders to get it. Just as long as they aren't on the M&Ms!! :-) Adorable card!

Uh oh....BAD dog! Cute card, though! I'll just LOOK at the spiders, you can have the candy corn when they're done!

Haha sneaky dog! Hope he didn't get a tummy ache! Very cute card though I would say you need to put the lid on the jar to keep the spiders from getting out lol! Very cute Halloween card! Thanks for sharing at Fab Friday!

Great combination Linda! I'm sure your cheeky puppy dog would love to be stuck in a jar with all things sweet!!! Kelly x

LOL! That is too funny. I just want to hug and pet them both they are so cute...even if one is guilty of such a crime!Can you tell I miss my dog? I think I am ready for another:)

Cute card! Love candy corn...spiders not so much! LOL

What a fun card! But I sure as heck wouldn't be putting my hand into that jar with those spiders :) And there's no way either of those adorable dogs would ever do something like steal cupcakes ha ha!

Linda, this card is just too cool! Love the crawlies on the candy corn!

Oh yes, the spiders on the corn make me shudder!! That's because I have two mason jars of candy corn on my kitchen table for decoration and I've wondered about spiders finding them! Fortunately our Josie (beagle) has left them alone. Funny, funny story!

Your card is terrific and I love your bold take on the sketch.